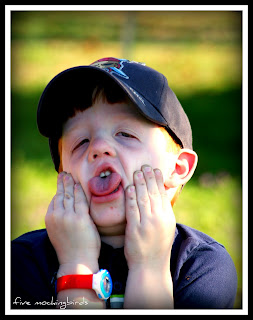 within the last two days seth has said some funny stuff. here is your laugh to get you through the end of the week. warning, you may never look at intimate apparel the same way again.

while walking through walmart, we pass the ladies undergarments. while spotting a padded bra...wait...get the image in your head...he says:
"Hey Mama, what is that?"
i keep on strolling, not thinking twice about it. "It's a bra, Seth." To which he replies:
"Oh, like you could wear it on your face while you mow the grass?"

i had to stop the buggy and lean over on the bar i was laughing so hard. You see, Micah has terrible allergies and wears a mask that looks like this while he mows...so...you get it.

I've also been working on trying to write down some House Rules, some sort of physical reminder of how we should act and how we should help (more to come on that later.) so after church tonight i asked the kids what they thought the house rules were. the one they had to learn the hard way today was "keep your hands to yourself." i knew that one was coming. then seth said:
"and no kicking...except if you are wrestling or doing karate on each other."

clearly he gets it.

after a few minutes had passed they were telling the same mind-numbing joke over and over so it was obviously time for the quiet game (which i'm sure luke would like for me to tell you that he always wins.) after a minute or two of being quiet (and constantly reminding sissy what quiet actually means), seth apparently had something really important to say because he whispered,
"Hey Mama, can we pause this game for a minute?"

seriously...it's why i keep him around.
so sayeth Becky at 11:53 PM No comments: 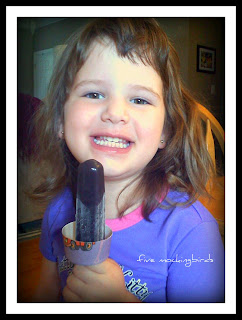 take those paper bathroom cups that your kids use and snip a little hole in the bottom and trim the sides down by 1/2-1/3. stick a popsicle through it and you'll avoid a ton of mess and stickiness! 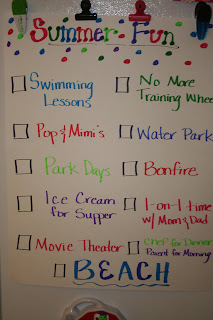 i know y'all are getting used to my gaps in blog time (something i never intended) but i guess i also never intended to be this overwhelmed in motherhood. on sunday morning, our class teacher reminded us that our first area for mission work started in our very own homes. i don't know about y'all, but some a lot of days, i'm thinking that going out into all the world would be much easier. you hear what i'm sayin'?

i am so very glad that it's summer time because we aren't bound to a schedule every week. i actually only have 3 weeks where something specific is planned and the rest is up to us. there is always something funny coming out of one of their little usually smart mouths (see my facebook page for frequent updates on that front.) speaking of...i have been stopped a lot recently with people telling me that they love my status updates. i'm not sure how to feel about it. maybe they tell me that b/c i'm brave enough to keep it real? i don't know. my kids aren't perfect and i definitely don't try to only capture and relay the moments when they can be. i'm just a mom, trying my hardest, and failing every day and as seth would probably tell you, failing in a lot of ways, to get these little monsters humans to at least act like they are the species that i am. (seth is a complainer by nature. he's 5 and he's rotten. i'm apparently doing him an injustice by cooking fresh food every night...more on sunday's stand off later.)

so, all that to say this...we have been busy the last couple of weeks graduating from 1st grade, losing more teeth, playing baseball in 100 degree heat, throwing up b/c of it, making out summer fun charts, splashing in a blow up pool, counting down the days until the beach and i am counting down the days to school starting, baseball parties, bike riding, morning walks, hitting, crying, facebooking for sanity...you know...the usual.

i hope to report more frequently about all the fun things we want to do this summer, but for real moments, you know where you can look. my status updates frequently. it's cheaper than therapy.